Note; This was previously a Magic Art in Focus article created in 2015 for Original Magic Art that has since been taken down.

When I received the brief from art director Dawn Murin for what would become Thunderbreak Regent, I knew it would be all about the silhouette; a Kolaghan Blood Dragon swoops over a Oujutai mountain monastery, channeling lightning from a gathering storm cloud through its horns to attack the building on the high peak.

To tackle that I ended up changing the way I create thumbnails. Previously they would be rather sloppy, quick scribbles on paper that mainly hinted at action and placement. However for this card I took some extra time, created fewer thumbnails but with greater clarity, focusing on (relatively) sharper silhouettes and bolder, more separated values. The result is far from a clean sketch but it’s a process that yielded far better results at that early stage, and one that I’ve adopted for each card since.


While many thumbnails showed promise I focused on picking the best fit for the upper frame, and chose the sketch that had the viewer pulled back from the action slightly. I scanned the page, drew over it in photoshop and added some basic colours underneath.


Most of the time I send two options so that the art director is presented with two very different approaches, but this time around I felt like this one would be sufficient. I created other colour sketches for other thumbnails, since even if I’m not sure about the pencil sketch, I might be persuaded of its merits when I see it in refined in colour.

After the sketch was approved I set about preparing for the final image, which usually means studies and reference photos. Keep everything! Or at least, hold on to most of your interesting items. A toy of the Hydra from the Hercules TV show provided some decent lighting reference for the long neck and head of the dragon.

To help me visualize the lightning-lit snow and rock, I did a quick observational study of a snowy mountain under harsh lighting conditions. While I only completed a portion of it, it was enough to give me some clues about bounced light, snow drifts and rocky texture.

Finally, on to the image itself. Since I was working with an environment and architecture, I took the time to create a perspective setup... a bit too complicated to go into detail regarding that image, but I was mainly looking to set up a building with proper right angles in 3d space.


I then used that perspective setup to properly segment the building into equal parts.


Once the perspective was sorted out I went on to creating a rough line sketch. This intermediate sketch is important as it allows me to explore gesture, shape and movement more freely than if  I were to create a tight sketch immediately.

It also allows me to create a final sketch where I’m able to focus solely on specific details, confident that the “big picture” is working well enough.

I set that final sketch layer to multiply, made the original colour sketch visible again, and then painted over it to account for the changes.

By this point, most of the hard work has been completed. The overall look of the illustration will largely resemble the final. This is the advantage of planning and making conscious choices ahead of time, as rendering will now be a relatively relaxed affair with few surprises. I paint/render an image from back to front, only switching to a new layer when there’s some sort of natural overlap.


And there it is! While there were a few things I wish I had done differently (a more intense explosion, maybe some different lightning effects) overall I was quite happy with the result. 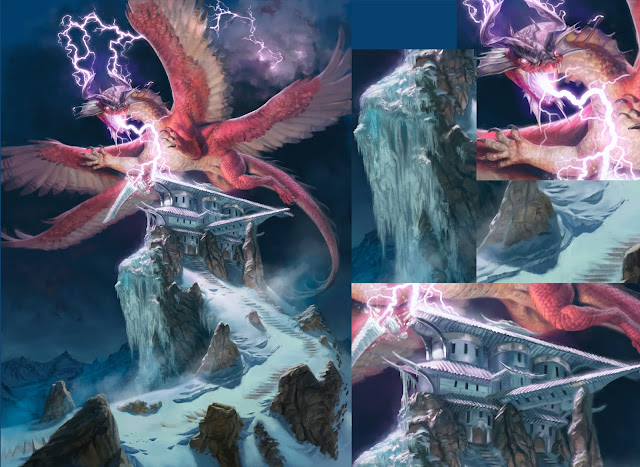 Posted by Jason Rainville at 8:33 AM