Process: Oracle of Dust & the Essential Art of Starting Over

The Magic: The Gathering card art I produced for "Oracle of Dust," one of the many colourless Eldrazi cards for the Battle for Zendikar set, seems to be one of my most popular pieces for MTG.

It was very nearly a disaster, or at least a headache.

Art director Jeremy Jarvis gave me a great brief;
Color: Eldrazi creature with blue header (see ref)Location: Shoreline in an Ulamog corruption zoneAction: Show us a vaguely humanoid Eldrazi of the Ulamog lineage, using the one on p. 200 of the world guide as a starting point. It's big--about 12 feet tall sitting down--and sitting by the ocean in a corruption zone, where seawater laps against a shore that's been entirely transformed into spongy bone and gray dust. Around it, we see the bodies of Zendikari whose heads and shoulders have turned to that same dust, but whose bodies are otherwise intact.Focus: The EldraziMood: Thoughtful, curious, utterly alien

That last bit was something that really inspired me, and helped inform the pose, mood and framing of the image.

Thumbnails are great except when they're not

I always produce a decent amount of thumbnails. Oracle of Dust was the first time I slowed down and tried to produce thumbnails in a clear, thoughtful way. I tied areas of similar value together, rendered them slowly and evenly so different areas were clearly marked out, and overall tried to make some concious decisions about the use of space. The results, as you can see, are still rough and scribbly, but they were still an improvement from my previous rough sketches. 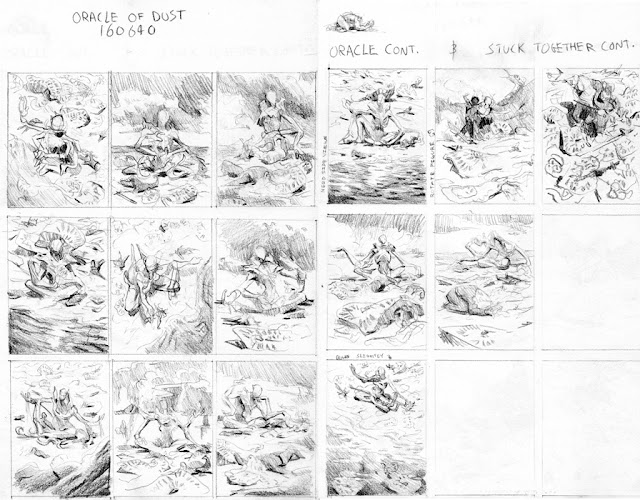 Then I tried to colour them.


For some reason my attempts to add colour were too subdued and desaturated, as if I was only using high-key pastel colours. The scene seemed to be obscured through a white haze; in-line with the "dust" aspect but not nearly what I wanted to achieve with some rich daytime lighting. The topline notes for battle for Zendikar clearly stated that everything was to take place during the day, with the otherworldly Eldrazi presented plainly and out in the open. There was also a unique challenge for this illustration; this was an image by the sea that would theoretically have a lot of blue, but as this was a creature with a blue header, I couldn't (as per our topline orders) have blue at the top of the frame.

I realized that I simply didn't have the right visual information in my head regarding the scene I wanted to paint. My brain was short-circuiting with the thought of "bright means things are light!" which I tried to implement again and again, and not the information that could accurately depict that situation. I was faced with the choice of pushing through based on principle (which is thumbnails always yield the best results) or starting from scratch.... I decided upon the latter.

Studies from observation are food for the artist's mind. They're so essential for the development and maintenance of an artist's skills that I'm confident in saying that no artist attempting any shade of realism can do without them. What's often overlooked is how helpful they can be outside of the vacuum of "practice" and in the context of preparation for a particular piece.

I scoured my reference folders for images of shores and beaches and found a few that featured a nude model on a rocky shore. The lighting was great, the salt-pitted rocks spoke to the spongy bone of the corruption zones and although she looked nothing close to an Eldrazi horror, her humanoid form nonetheless could help describe the way light would fall on a more-or-less human shaped body.

I quickly scribbled some new sketches, taking what I learned from these photos and applying them with a little thought given towards adaptation; photos aren't real life, and the lens doesn't capture images the same way we see them. Later on while working on the image I didn't apply the grainy haze seen in the first photo, and I also made sure that the colours were a bit more vibrant. 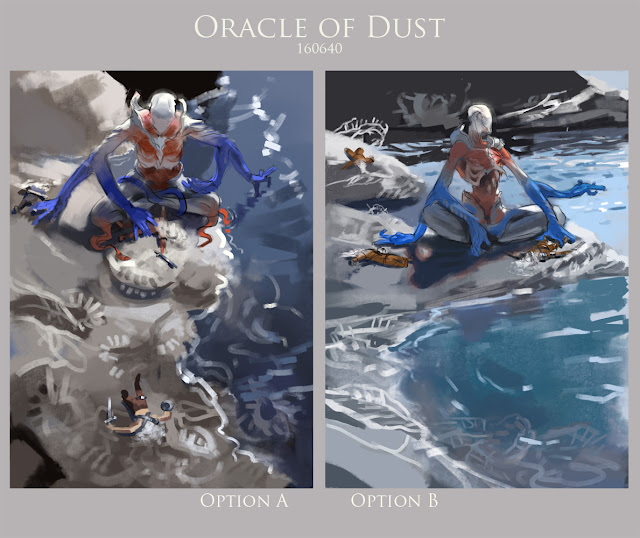 That's better; a better sense of space, more clearly defined values and richness that wasn't present in the first batch of colour sketches. The "utterly alien" line informed the poses, which have been described as "alien hindu" poses but are really just  attempts to show a bifurcated-limbed horror pondering.... something. Mortal life. What it has done in this scene. The beautiful scenery....

After sending in the above options Jeremy replied that he would be satisfied with either approach and that the decision was up to me. While Option A was an interesting angle, a similar point of view was selected for my other piece Adverse Conditions, so I chose B.

Sketching, painting, and when and when not to be specific 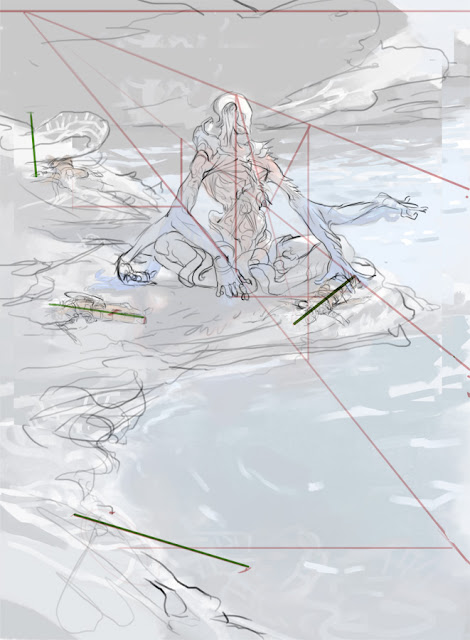 After taking some reference pictures in my underwear (not shown here or ever; I'm shameless but the images just look grody) I did a rough resketch of the creature, added the implied perspective and plotted the size of the creature relative to its victims. this was fairly simple since the creature is 12 feet tall sitting, half that would yield about the right height of a heroic Zendikari.

Once all that was in place I created a tight sketch of the creatures and victims, seen below. I kept the simple rough sketch-in and colours of the rest of the scene as unlike the characters and creature, landscapes are more malleable and follow somewhat less visual "rules." Stating them with very detailed line is unnecessary when the stroke of a digital brush is most of the statement already. 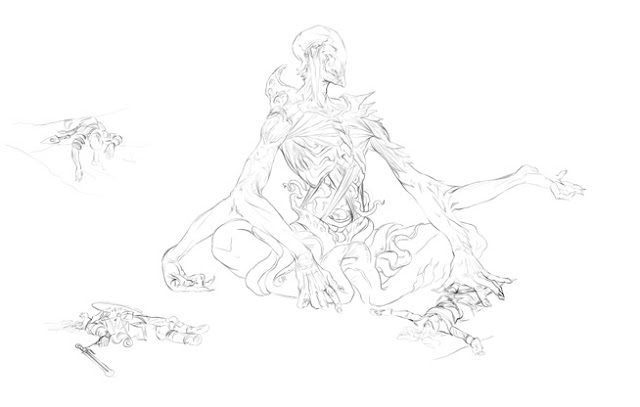 First I paint under, then over. That is to say, I begin actually putting the colours down by first applying my sketch as an overlay, painting very rough colours within the lines to account for the different between the initial colour sketch and the final line sketch, then continue painting rough colour under the lines until I'm happy with the way the piece is heading, and finally paint on top of the whole image, back to front.

The gif below starts with that final sketch and ends with the first "background layer" painted over the colours. I got lost in the waves on this one, drawing from a few different sources, adding more saturated colours to hint at a more vibrant sunlit beach. I found the key to distant waves seen at an angle is fluid solidity, with relatively sharp edges to show the peaks overlapping each other. When viewed closer and from above however, softer linear detail is important and minor ripples coruscate across the landscape of the larger swells.

I didn't have the time to include the third foreground figure I intended to paint or to really get into the detail of the closer waves. The fact that most of the bottom of the image would be obscured made up my mind to finish the image up as best I could and send it in. 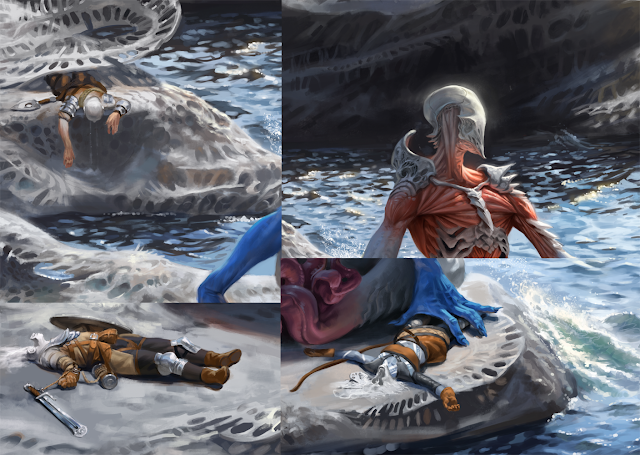 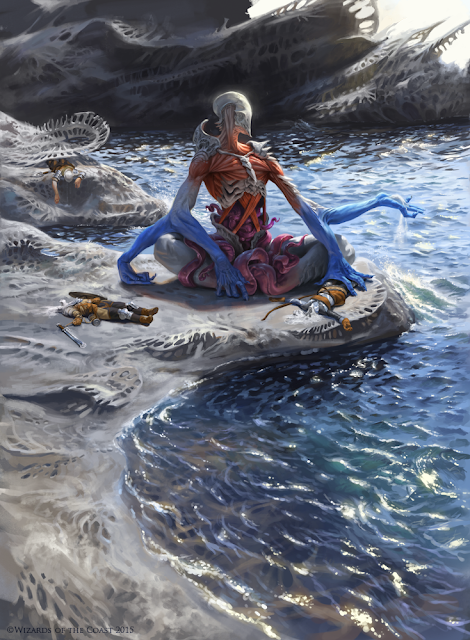