My "New" Process (and why you should take risks)

When I was just starting out making cheap little illustrations I would simply go right into a sloppy grey-scale sketch. If it was client work I'd send it off for approval. Back then they usually looked like this; 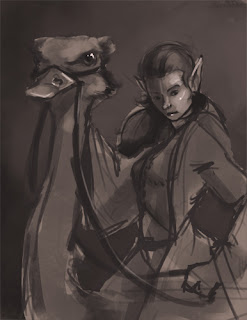 Prelims aren't meant to be finished images, and the problems with the one above are more technical and skill-related, but the issues with my early process becomes clear when you see the final; 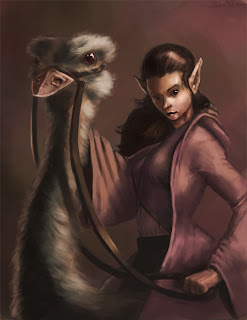 Again, technical issues aside, all I did was throw a colour layer over my sloppy sketch and tried to render my way out of the corner I sketched myself into. No references, no planning, no thumbnails or colour exploration. Just slop it on top and hope for the best. This time in my artistic development was spent trying to emulate my digital art heroes by rendering and rendering.... and rendering. Overlay layers, grey-scale sketches, texture brushes, they're all great if you know what you're doing. I didn't. I didn't have a solid preliminary process, I had an even worse process of translating early rough stages to intermediate and final stages, and I was ignoring my best allies; line and structure.

I remember late 2010 pretty well, because it held a breakthrough. Just for fun I decided to paint some sirens. I forget what the inspiration was, but I do remember an image of a nude model by the sea that I wanted to use. Rather than go right into a dirty, sloppy grey-scale sketch, i tried something new; a dirty, sloppy line sketch that only hinted at the main actors.

Over-top on a multiply layer (which expresses true colours so long as your background is white) I brushed in some vague colours. More importantly, I went straight into the colours, skipping the grey-scale layer entirely.

I felt a new sense of freedom as I tried some subtle colour combinations, bolder brushwork and funny enough, simpler rendering. I felt like I was painting rather than wrestling with a digital program.

I still didn't nail down a preliminary process, and in the years to come I would still end up using overlay layers on top of grey-scale sketches, but this was one of the first times I stepped outside my comfort zone and tried a "fill in" approach rather than my "block in" approach. both would be important I would find out...


Fast forward to the end of last year and what I consider not only a typical example of how I work (even though the thumbnail process is changed again) but in my opinion one of the more successful illustrations I've created - the cover to The Lords of Gossamer and Shadow diceless RPG; 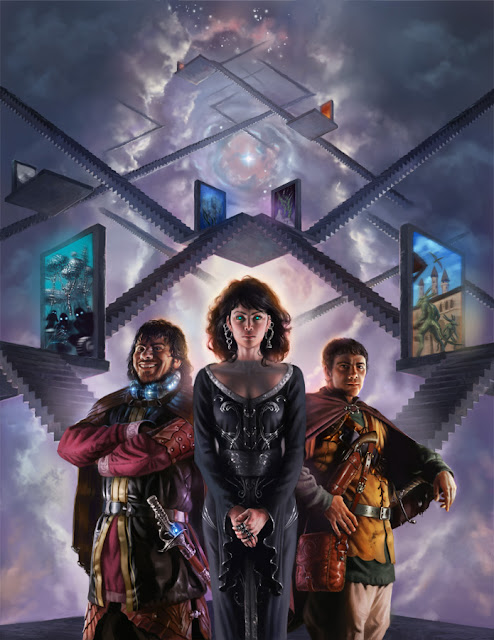 The success of it had a lot to do with good clear direction from a small publisher and my first real client from a few years ago, and a genuine interest in the game and setting after reading through the manuscript. Always ask for something more unless you've been given a fair amount already. After reading the art order and whatever supplementary materials are provided, I try to answer;

- what is the background of the characters and settings I need to portray? how should they act or feel?
- what overall emotional impression should the viewer take away from the image?
- what existing imagery (reference materials or works of art) might the client have had in mind when creating the elements of the setting?
- what liberties can I take, and what is set in stone?
- how busy is this art director and how important are these questions to them?

If I can't answer those then I ask for more, and that last question is important when dealing with different clients - larger clients may care more about internal consistency with the world that's already established but might leave a larger part of the idea-generation and small details up to the artist.

The rule for me now is - something smaller reworked into something larger. Most of the time that means thumbnails and small sketches, other times it might mean some pixels splashed around on the computer to give an overall impression. What it never means is a doodle that's finished and presented at the size it was conceived at, digital or otherwise. That "reworked" is an important part of it. I abhor the method of one-shot-make-it count or noodling at the same image until it vaguely forms a decent direction for the illustration to head in. I believe in well-thought-out and explored upon design and revision based on a preplanned destination over the constant shuffling and re-packaging of icons and imagery. The latter I feel tends to lead to emotional/thematic stiffness, confusion of intent and worst of all, similarity


That's an awfully long way to say that I start with thumbnails. 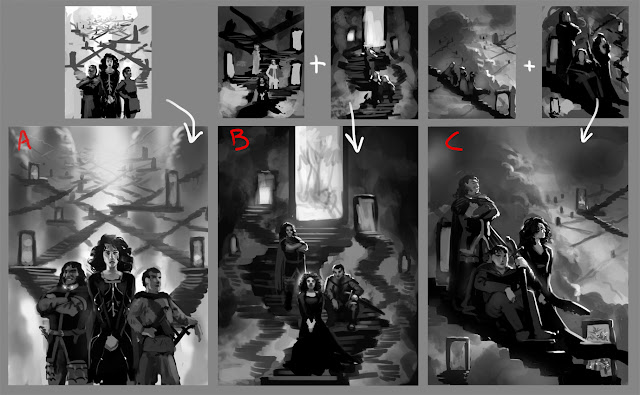 When I was creating the LoGaS cover last December I was in a phase where I created my thumbnails digitally with no linework. Limited to 4 basic values this process is great for developing a very clear tonal range but for me ends up lacking in structure.

These days I'm back to thumbnailing on paper. For whatever reason, I find working on paper allows for some more genuine, structured ideas to form and I'm dissuaded from over-working the thumbnails due to the small size and medium.


Sorting out the values begins on the page and is fleshed out further when I transfer the sketch to the computer, but if the colours or values are ever in question I may try for a quick a quick colour exploration phase. This involvs splashing colours around without the need to fit them within the lines and allows a lot of freedom for exploration.

The transitional phase between the rough sketches and the final rendering is, for me, the most important part of the painting. The way I translate that original idea can have a huge effect on the final product, either reinforcing the gestures, mood and values or muddying them up.

The first step is gathering and shooting references. If there are any figures in the scene, I'll likely shoot references of myself for them; there's no reason not to, and I can always disregard the visual information if the photos don't reflect an important aspect of the original idea. Perhaps the lighting is wrong, so I'll improvise, or the gesture isn't expressive enough and I'll only use the folds of the fabric etc. Don't ever shy away from references, but know their limitations. Following them too closely will mean you're copying the photos "mistakes" such as lack of energy or lighting inconsistencies.

In the image above I used two cheap refurbished display lights and an old kodak easyshare digital camera to capture the reference for Calais, one of the characters featured on the cover. You probably won't have full costumes at hand for each character you create, but some belts, a long sleeved shirt and a bed sheet can go a long way. I take many photos per character as you never know when some small turn of the body or gesture of the hand will make for a better image.

From here I'll go back to the original sketch and create a rough sketch overtop using the references I shot/gathered. it's important in this phase to try to capture forms and gesture over details and likenesses; 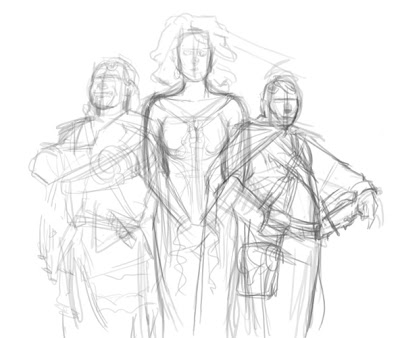 On top of that comes the final sketch. This type of final sketch is best for detailed characters and creatures, not so much for landscapes. it's important to only add the detail you need; a large turning of a form (such as a large swath of cloth) can be detailed in only a few lines, whereas a face or a flintlock pistol requires some more detail; 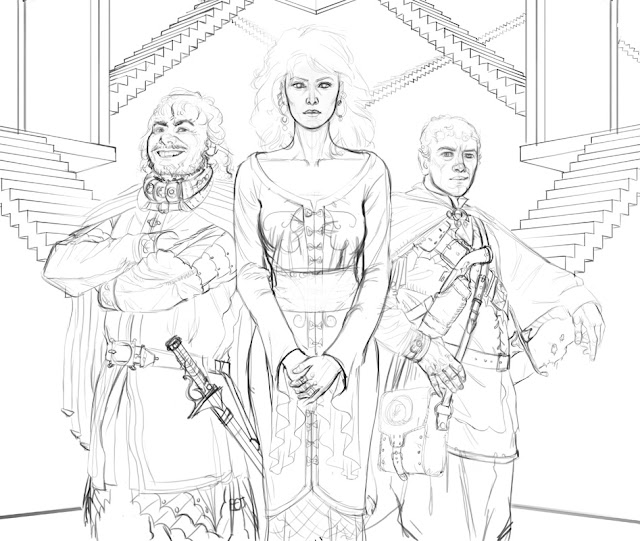 This is NOT intended to be "linework" that others might see in the final image, and so I spend little time fussing with the quality of the lines. This is only for me, a guideline that solidified the structure and design of the image.

I set this final sketch layer to "multiply" and then directly apply colours underneath. I start with a basic fill and add in some basic detail and variation, trying not to get too far ahead of myself. I might add some quick overlay or multiply layers above the image at this point to push the colours or values in a certain direction, but the directly-applied colours do all of the heavy lifting. At this stage, the image has the potential to be a bit awkward looking; 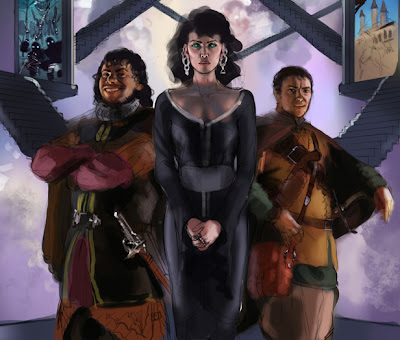 The whole final phase is essentially rendering using brushes on a normal layer with references in hand. Because I use a planning-heavy process, if the image isn't working at this point it's difficult to steer it back on course. This final phase is realizing what's already there, not creating what isn't; an element thrown in at this phase has the potential to throw the composition out of balance. Here are a few animations of the final process;

And that's about it!

The best thing to keep in mind when figuring out your process is that it can change. Try new things, take that chance. Do you work primarily from grey-scale? Try going right into the colours. Do you Always use line? Try brushing in broad shapes first. Add and subtract elements of your process to try to find the best fit for you, and make sure to never poo-poo a tool or process until you've tried it yourself. Above all else; the process and tools are subordinate to your own skills and understanding of artistic principles. Sometimes instead of looking at your process or influences you just need to knuckle-down and do the work that your skills require.